Last Friday Sandy and I decided to cruise the North Fork of L.I.. We simply wanted to see if our favorite day trip destination during spring, summer & fall would yield a find or two in the middle of winter.
Our hopes were dashed when we arrived at our first stop for blueberry muffins and coffee at Briermere Farms in Riverdead and found it shut down tight. We couldn’t remember ever seeing them closed!
Continuing down Sound Avenue I wanted to stop and get some fresh eggs from Dave Wines (that’s actually his last name) at Llywd Farms. Upon entry to the farm, although everything looked deserted, we saw a little sign saying “Eggs Inside”. Whew!
They sell potatoes, carrots (Dave points out the cold weather makes them sweeter), and leeks at this time of year. If there are none inside, Mr. Wines goes out on the property and digs up his veggies from the ground while you wait.When I asked him if he could give me a recipe for leeks, he brought out  his wife Liz, a lovely Scottish lady. She was quite happy to pass on her simple (and great for this weather) recipe for potato leek soup…which I would like to pass onto all of you. 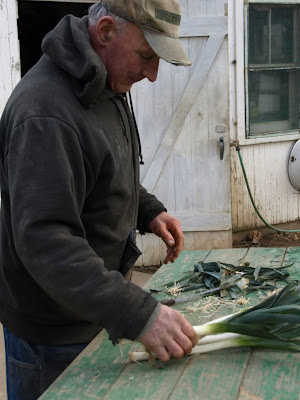 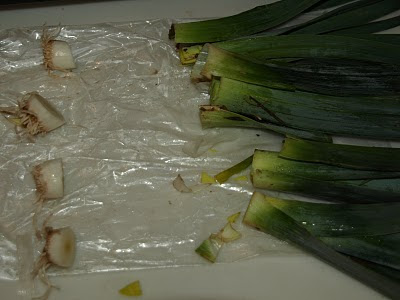 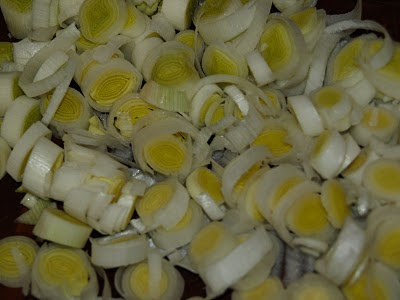 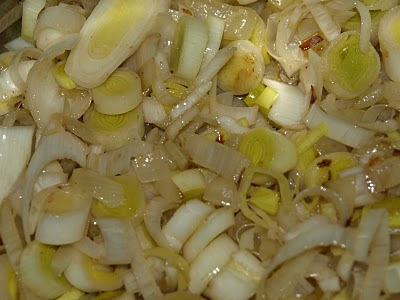 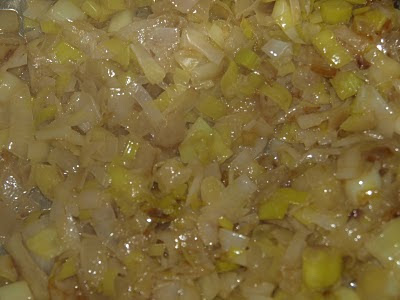 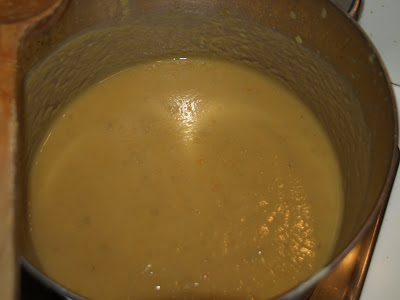 On my own..I added one of the carrots (sliced into 1/2″ pieces crosswise) I bought from Llywd and decided a dollop of sour cream plopped on top was in order when ready to serve.

Directions
*In pot and cooking  on medium heat, melt butter. Add onions and leeks… (and carrot if you choose). Saute until soft…about 6-8 minutes
*Add stock and potatoes and cook for about 30 minutes, stirring once every ten minutes.
*Turn off heat, and blend with immersion blender. Salt and Pepper to taste. No immersion blender? Get one. They are indispensable in any kitchen.
*Add 1/2 & 1/2.
* Serve

Mrs. Wines suggests that if you are planning to freeze the soup, do not add 1/2 & 1/2. Wait until ready to eat and then add.
I would like to add if any of my readers has a suggestion or another potato leek soup recipe. please pass it on to me in the way if a comment or email chefbert1@aol.com

OK…so it’s time for lunch and we give our favorite burger spot (Magic’s Pub in Westhampton) a call just to see if they are open. No answer! Goodness me oh my!
Since many spots were closed, we decided to head home while still keeping an eye out for that elusive find, let alone a place for lunch.
A couple of minutes went by when I said to Sandy “There’s a vineyard I’ve never seen before…wanna go in”?
“Sure”, she says…”turn around”.
I pulled into the empty parking let (empty only because it’s the middle of the winter) in hopes of finding people inside. Sandy waited in the car in hopes I would be coming out with a thumbs up and soon as I was met by two absolutely wonderful gentlemen who looked as genuinely happy to see me as I was to see them. I went out to give Sandy the thumbs up. In she came and the wonderful cheese and wine soiree that ensued made us fans forever.
Trust me…a more gracious reception you could not ask for by Hal and Nash, the proprietors at Clovis Point Vineyard.
While there we asked them if they would they happen to know where to get a good burger in the area since Magic’s in Westhampton was closed, and without skipping a beat they said to try Luce Hawkins just down the road.
They are truly fun people who know how to make folks feel at home.
Not only do they happily pose for pictures with their customers, Hal may even break out in song with his Grand Piano by the bar. 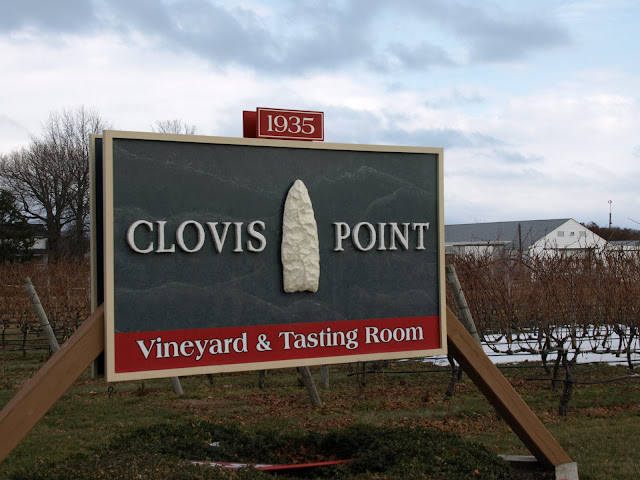 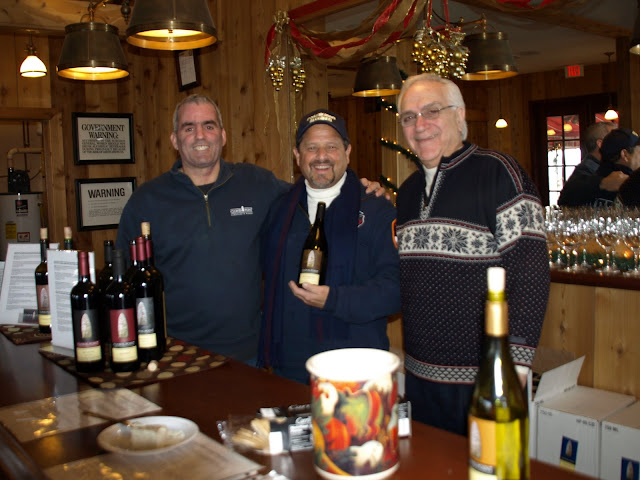 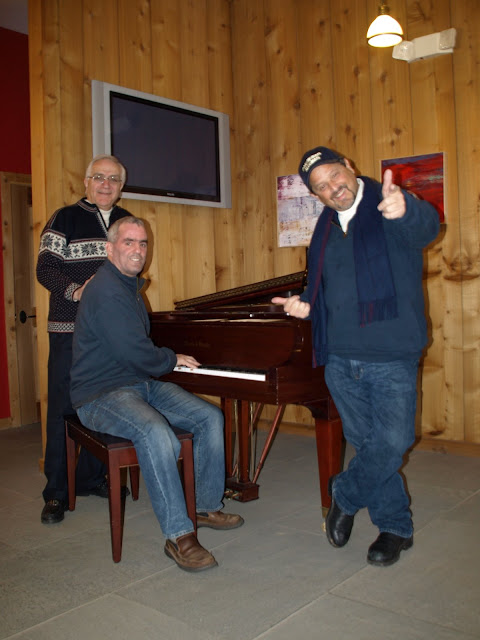 Take it from me…visit Clovis Point Wines on your next trip to the North Fork. This is a find! We particularly enjoyed their red blends, namely “ARTIFACT” & “ARCHAEOLOGY”!

Saying Hello again to Nash on a recent visit to Clovis Point!

Find number two was five minutes down the road at Luce Hawkins, a fabulous restaurant in a most bucolic setting run by a chef by the name of Keith Luce and all part of the “famous” (as we ultimately learned) Jedidiah Hawkins Bed & Breakfast.
I happened to have had on my “Parmigiano Reggiano” hat when I walked in and (as timing would have it) was met by Chef Luce himself.  At the time, I had no idea who I was talking with until I asked and he then introduced himself and Kristen, our fabulous (as it turned out) waitress with personality. We commiserated for a few minutes about the Parmigiano Reggiano cheese factory tours we both experienced in Parma, Italy and a bit of Luce history….and then it was off to the dining area for our burger. 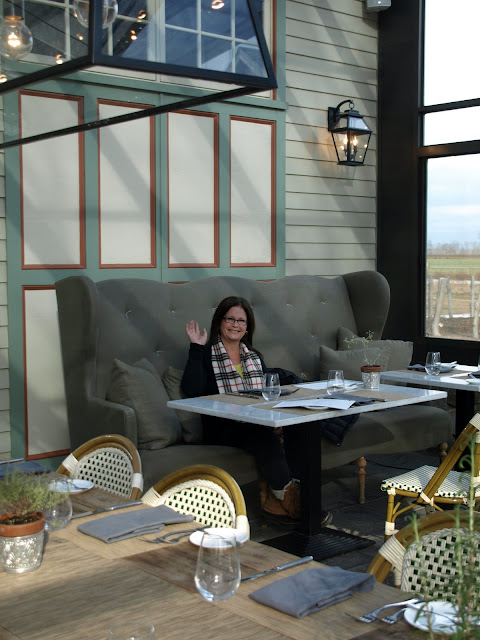 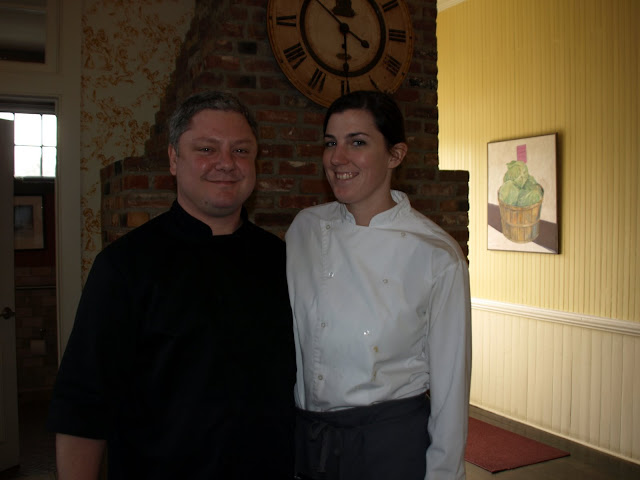 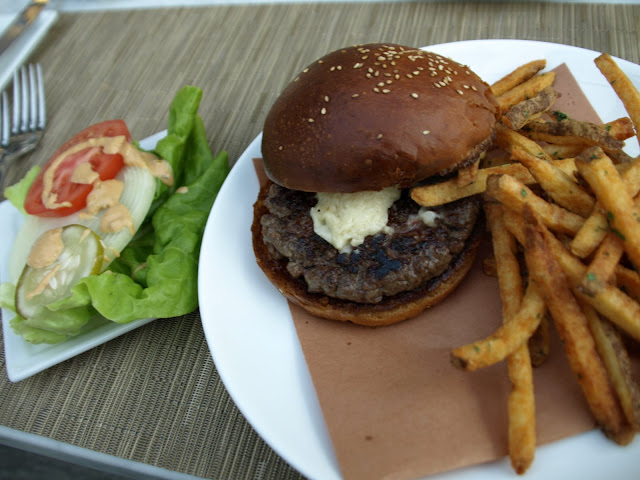 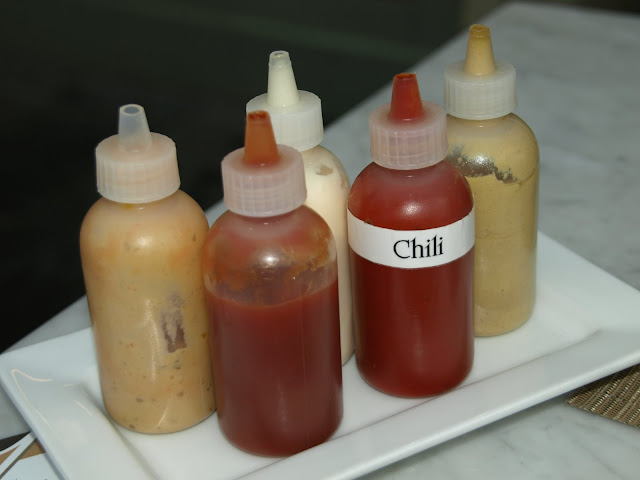 What can we say?
The house-ground grass-fed beef burger with house-made “velveeta” cheese & subtly herbed fries were just fab and served with a selection of sauces in little squeeze bottles that included ketchup, mustard, hot sauce and their secret recipe sauce (something like Russian dressing with a hit o pickle juice and spice). As well, a small side plate that included pickles, lettuce, tomato and onion accompanied each dish.
Since we wanted to try dessert (called “Sweets”) and couldn’t make up our minds between mini gourmet small round donuts, rosemary ice cream, profiteroles, chocolate sea salt puddin’, a brownie sundae with butterscotch and chocolate, gelato and cherries, and ‘Nillamisu’ (a decidedly American take on the Italian classic)…we were graciously served a bit of each on one plate. Wow! 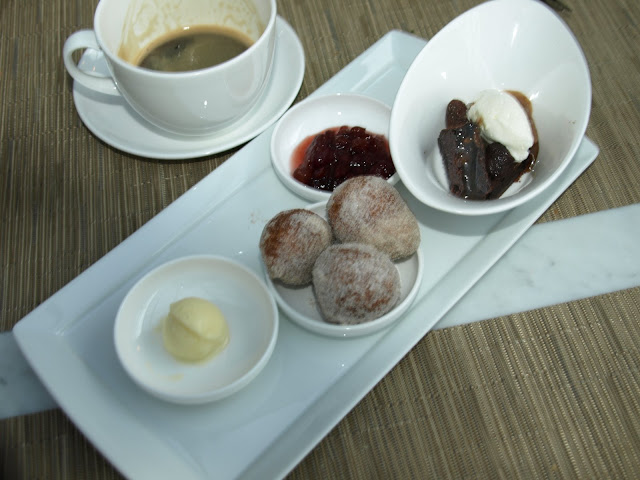 As we were leaving, I noticed a signed with commentary esposing the virtues of their Chef picture of Hillary and Bill Clinton on the wall. Standing in the middle of them was what appeared to be baby faced twenty something, as it turned out to be, Keith Luce.
The guy was famous…and you don’t become the White House Sous Chef unless you know what you are doing.
Such a low key and gracious guy too. Not many Chefs like that…too much ego.
Here’s a little history of Chef Keith Luce.
Chef Luce is a native Long Islander. He spent his childhood on his
family’s farm, a few miles from the site that is to become Luce’s Landing.

When Luce left his home some twenty years ago to “seek his fortune” in New
York City, the area was a different place entirely. A few brave souls began
to plant grapes for wine and were for all intents and purposes ridiculed and
certainly not taken seriously. In the back of Keith’s mind however, as he
advanced through his career, he never lost sight of the dream of returning
home and again becoming a part of the North Fork Community. Without knowing
it at the time, the long summer days spent working the land with his father,
paternal grandfather and even his mother would leave a lasting impression.

When Luce ﬁrst moved into the city, he caught his ﬁrst glimpse of “haute
cuisine” working in such culinary bastions as The Rainbow Room, La Cote
Basque and Le Cirque.

After New York his career would take him to the legendary Greenbrier Resort
in West Virginia, multiple three star restaurants throughout France and
Italy and, perhaps most notably, The White House in Washington D.C. Where,
at the tender age of 23, Luce was appointed Sous Chef to then President of
The United States, William Jefferson Clinton.
What more can you add to that resume?
A great Chef and a nice guy…just like me!

Photos coming very soon…so stay tuned one and all.
Remember…wanna be a part of what I do here…just input with your recipes…comment on mine…let’s roll!