Happy 2018 everyone! A quick aside and for the record.
The temperatures in New York City are setting records. Tonight it’s supposed to be 5 degrees. We haven’t seen a two week stretch of cold like this since I lived in Forest Hills in 1961. Wind chill factors are 10-15 degrees below zero!

Now…onto nice a warm pizza destination…
Speaking of 1961 in Forest Hills…One of my oldest pizza memories at that time was at the Pizza Den when pizza  was .15 cents (and then up to .25 cents) a slice. $.50 cents got me two slices and a Coke with .10 cents change. Can you imagine? 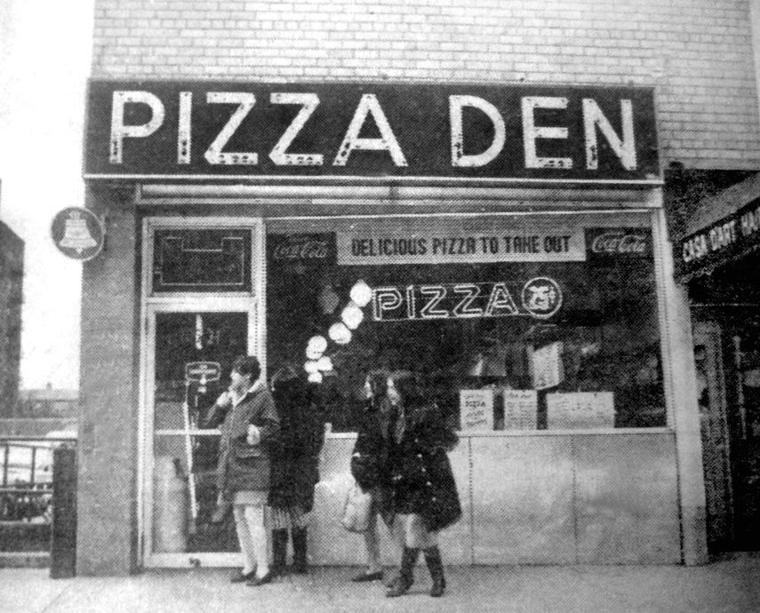 What struck me about Lazzara’s was that their thin crust rectangular ‘Sicilian style’ pizza pie was the same as The Pizza Den. It wasn’t only the same shape, but it brought back memories of a flavor and thickness (or I should say thinness) that was remarkably similar.
It’s still called Sicilian Pizza, however it is the much thinner crust in the rectangular shaped pie that is the norm for  Lazzara’s and was the norm for The Pizza Den.
My take on pizza is that it must be…in this order…a perfectly prepared recipe of properly baked bread (preferably made with Italian flour, sauce on the sweeter side and a blend of mozzarella cheeses made from fresh cow’s milk and/or buffalo mozzarella. Whatever the recipe is at Lazzara’s, it is their own and it succeeds famously!

Outside view on the north side of West 38th St. just off 7th Avenue

Short and sweet…to the point…pizza worth seeking out in New York City’s
Garment Center!

*Heroine
A woman who, in the opinion of others, has special achievements, abilities, or personal qualities and is regarded as a role model or ideal
As usual, please feel free to comment below…

One thought on "Lazzara’s Pizza In New York City…Excellent & One of a Kind!"

It's Carrie's friend Masha, we met at tree trimming party. I can't thank you enough for the jar of sauce you gave me, it was out of control delicious. I tried it one night with just penne and then the next day i made some chicken parm with it and it was incredible. I wish i could say i shared it with friends but it was just too good. Had a blast meeting you, blog looks amazing these photos make me want to leave work and go food adventuring. Let me know if you are offering up sauce making classes!