We are invited to wine tastings throughout the year, however, this tasting at the Prince George Ballroom on West 27th Street in NYC had a distinct air of exclusivity by virtue of the vineyards participating.

“Winemakers & winery owners from some of the finest estates in the world will be in attendance” is how it was advertised and it lived up to my expectations. None of my chefs or chef friends could make it, so I went myself and met some interesting personalities…winemakers & attendees alike, who we will hopefully be able to see again at their vineyards.

First, a little information about Vintus as seen on the www.vintuswines.com website.

In April 2004, Michael Quinttus founded VINTUS based on his desire to develop a focused portfolio of exceptional, family-owned, estate-based producers of hand-crafted wines. Michael’s ideas and contacts were formulated during his previous 18 years at importer Kobrand Corporation, where he was Senior Vice President, responsible for managing their wine portfolio.

It is the goal of VINTUS to assemble a diverse, international range of “wines of place” produced by passionate personalities driven to extract the maximum expression from their estates. Our producers are intensely attuned to their environments, emphasizing biodynamic, organic or sustainable viticulture and winemaking. This theme of site expression weaves through the entire VINTUS portfolio of wines and will remain a cornerstone of our future growth.

I tried to catch the attention of Mr. Quinttus, however, he was conversation each time and I missed speaking with him. I have a friend by the name of Mitchell Nathanson who is, in my opinion, THE authority on French wines and trying to get to Mr. Quinttus was reminiscent of trying to speak with Mitchell. The guy has so much to say that you simply do not want to interrupt.  I did, however, get to chat a gracious few moments with Francoise Chaillou, the New York/New Jersey Division Manager.

I arrived and found my way to the cheeses and beautiful artisan breads from  Bread Alone were there for the tasting. Sharon Leader was presiding over her wonderfully dense Organic Levain French sour dough, fig & hazelnut, and Organic whole wheat sour dough with their “made by HAND each and every day” logo gently placed on the top of the whole wheat bread in the form of some sort of color tinted flour.

I like to very lightly toast these types of breads as they become more flavorful and the crust becomes less chewy.

I can only say I enjoyed something at every stop. First I tasted the whites at the approximate 20+ tables. In most cases whites are easy to taste and then spit out, thus I made it through relatively unscathed, although the second phase of tasting the reds was another story.

It was quite difficult to be selective with all the selections since I felt these winemakers represented the best…and even while taking control of the seductiveness of some beautiful reds, I could not help but feel round 2.

When I get to that point I stop, as it is unfair to the winemakers (my subjectivity).

I did get to meet many passionate and fun personalities. Among them was Enrico Santini, an organic wine producer in Bolgheri, Italy about 50km south of Pisa on the Tuscan coast. It seemed each one of these winemakers was genuinely passionate about their product (a prerequisite within the Vintus fold) and if the opportunity presents itself, we will try to get to Enrico’s vineyard. I particularly enjoyed his  Merlot/Cab/Syrah and Sangiovese blend named Montepergoli. Affable Lawrence La Manna, owner and executive director of the Sommelier Wine Academy wound up next to me at Enrico’s table and they were both gracious enough to smile proudly with wine bottles in hand. (see pic)

At the next table, another Tuscan vineyard named Petrolo was impressive. I met Luca, another gracious fellow with a wonderful merlot…yes merlot…named Galatrona! (see pic)

A Tuscan red named Sister Moon from  Il Palagio vineyards and poured by “Nicole” stood out for me. Afterwards, I found out this vineyard, just south of Florence, is owned by none other than the musician known as Sting. (see pic)

I guess I mostly gravitated to the Italian wines since soon we will be on our way to Italy and was curious to find new vineyards. Tomassi in the Veneto region was particularly interesting. The land of Valpocella, Soave and Amarone produce wines in areas near Verona we have never visited…not to mention Prosecco land.

Pierangelo (see pic) is one of 6 family members who operate Tommasi Vintners, and if his gracious reception was any indication of who these folks are, it would be worth a visit. He even promised us a free glass of wine if we visited the family restaurant Antico Caffe. Ask for a fellow by the name of  Simone.

There were some standout French producers I enjoyed.

A good value and a great 2009 St.-Emilion was enjoyed from Chateau Boutisse operated by the Milhade family.

The French vineyards of E. Guigal, “This planet’s greatest winemaker” according to Robert Parker was, as usual, well represented. Although it rained in most of France in the summer in 2007, it stayed dry and sunny enough in the south to produce a nice ripe 2007 Gigondas. Although Mr. Parker exuded that the 2007 Chateauneuf-du-Pape was the greatest vintage he has ever tasted, I immensely enjoyed their 2006, with it’s rich red fruit taste. Smoothness and silkiness personified.

The Clos du Papillon Savennieres 2008 was another enjoyable wine from the Loire Valley and produced by Domaine de Baumard.

I also found a very nice 2008 Lanzaga Rioja with a beautiful red color and soft tannin’s from Spain’s Telmo Rodriquez.

The entry from Austrailia that caught my eye and impressed my buds was the 2010 Directors Cut Shiraz by Heartland Wines. A tidbit of information I thought quite unusual was that Coppola wines in CaliforNi-Ay actually had to get permission from Heartland to use the words “Directors Cut” in the naming of their wines. seemed to me it would have been just the opposite. Hmmmmm.

It’s funny how you meet people. I’m the type of person who can open up very easily and meet and greet those who share my interests. Heck, even if they don’t share my interests, I can open up.  So I turn around to this fellow to ask how he liked a particular wine and after chatting for a minute he points out the virtues of Michael Quinttus and how he created Vintus. It turns out this nice humble fellow is Dr. Jay Miller of Bin 604 in Baltimore, Maryland….ie www.drvino.com…just fabulous. Thanks Dr. Jay!

In closing, I’d like to thank Mr. Francoise Chaillou for his invitation to attend the Vintus 2012 tasting. As well, the many producers and attendees for their education and being gracious enough to pose for the photographs I took for this writing.

Additionally, I’d like to thank my buddy Mitchell Nathanson for teaching me the virtues of French wine.

As some of you know, Mitchell can espouse the virtues of French wines like no other human being and if it weren’t for him, I’d probably still be drinking wines only from Italy and California.

Cheers to you in 50 languages…and…

From top: Bolivar, Alfredo, and Luis
Bottom: THE CHICKEN SALAD 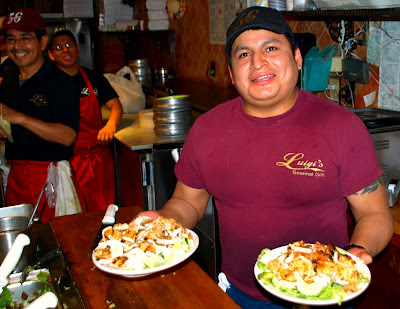 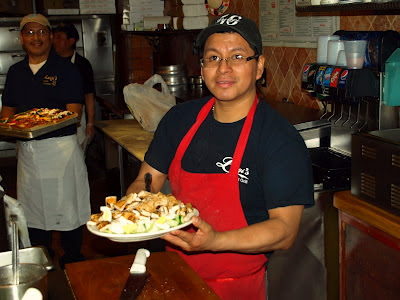 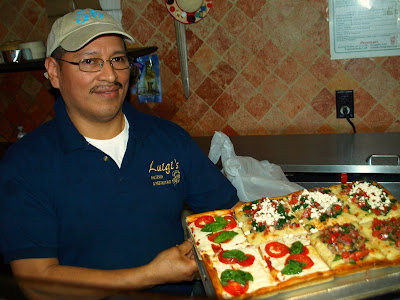 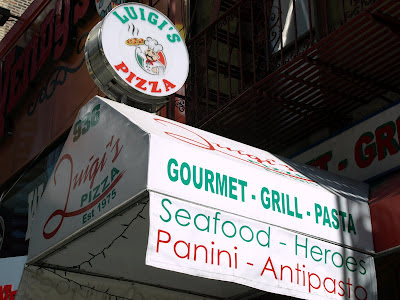 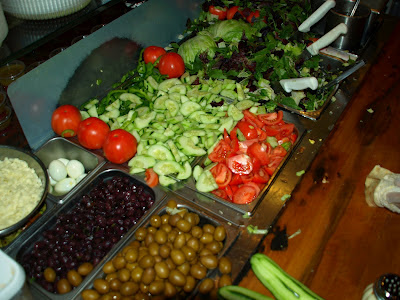 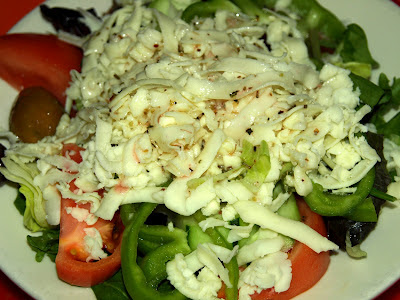 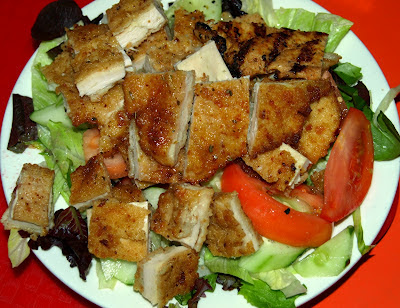 I was speaking to my surfing buddy Freddy this morning on the LIRR. As usual, the conversation gravitated to food and how one of his friend’s has a concept Italian restaurant in Maryland.
The concept: Self serve “Gourmet” Italian food.  Order your meal…pick it up at the counter…and enjoy fine Italian dining fast food style. I’m thinking out loud and asked him why we haven’t seen such a concept in New York…and he shrugged his shoulders as if he can’t imagine why.
Next thing you know, I’m walking on 8th Avenue in Manhattan after visiting my Mikey my accountant, and staring me in the face is the word “gourmet” on an awning for Luigi’s. Right away…gourmet Italian, my conversation with Freddy, and NO WAY pops into my head. Could it be I’ve walked smack dab into the ‘concept’?
As you know by now, I’m not a critic in my reviews. I will, however, write about what I “find” that I love, what I experience and what I eat. To the point: Luigi’s IS a find!
Upon entering, I spot a customer eating chicken Marsala with mushrooms, another munching on tenderly coated fried calamari, and another about to dig into the house salad with mozzarella (they were gracious enough to let me take the picture seen above). All looked tantalizing.
I saw wonderful and fresh looking pizza pies. Among them, Luis holding a tray of 3 different kinds of  Sicilian style slices…namely  Feta, Bruschetta, and Fresh Mozzarella with tomato and basil. The latter will be on my list for the next visit.
Back to Lunch: Perusing the rather lengthy menu of about 100 choices…and staring at a large bin of  mixed lettuces, bin of olives, bin of cucumbers, tomatoes, pizza pies, calzone’s, hero’s, soups and main dishes…I decided to ask the fellas who look very happy about what they are doing what they suggest. “The Chicken Salad” with a big smile was the response. I think it was the smile that sold me.
I then watched as they proceeded to plop into a bowl a huge handful of greens, black and/or green Sicilian olives, unwimpy slices of cucumbers and tomatoes.
They then slap the chicken on the cutting board and with a few quick chops, they cover the entire bowl of veggies with the biggest and juiciest piece of chicken (cutlet or grilled) you ever saw in your life. Luis was gracious enough to let me taste both types.
The dressing is made with garlic infused EVOO***, sherry vinegar and their own secret blend of spices that makes the salad sing!
With regard to the word “gourmet” so proudly emblazoned on their awning out front, I can say
the chicken salad, as simple as it is (sometimes the simpler the better), fits that billing.
As I’m finishing up and getting ready to leave, a young lady sits next to me with a slice of pineapple pizza and a bowl of pasta faggioli (pasta and white bean soup). “I love this place…” with that yum look in her eyes was her response to me when I asked her about the soup.
As I’m walking out of Luigi’s behind two fellows with food to go, I see them pop into their car.
I said to them “you drive here to get your lunch”?
“Yeah”, one of them says, “we come down here all the time from Harlem. The other says “the office wants chicken salads…so we come down to Luigi’s”.

Note: I’d like to thank Bolivar, Luis and Alfredo for posing with their chicken salads and pizza… and their big proud smiles. As well, I would like to thank Luis and the management of Luigi’s for their cooperation and permission to let me write about my experience in their restaurant.
I never had the opportunity to meet Luigi. Perhaps next time.

Luigi’s Gourmet Grill is located at 936 8th Avenue between 55th and 56th Streets in NYC, NY