As I commented on my Facebook page...
"Sincere thanks to Anton Media Group writer and editor Dave Gilbert de Rubio for his polished writing skills. Credit must also be given to Charlotte Murphy for discovering my blog...and...to Newsday's newspaper Alejandra Villa, an Emmy award winning photographer extraordinaire for taking a pic that is worthy of this second write-up.

I'm humbled and deep down inside happy to be...again...worthy of the recognition."
Master Chef Contestant Is Top Shelf Foodie
BY DAVE GIL DE RUBIO
dgilderubio@antonmediagroup.com 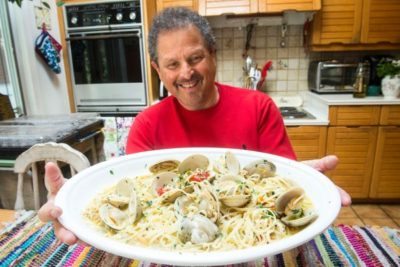 Ownership of a garment hanger
company may be Bert Spitz’s
profession, but food is his passion.
He is a personal chef and regularly
posts to his food blog Phoodographs
and Finds (phoodographsandfinds.
blogspot.com), which allows him
to combine his intense interests
in the culinary and photographic
arts. Recent blog postings had Spitz
waxing rhapsodic about his homemade
potato salad made with dill
pickle, a summer Broadway market
and tasting expeditions he made to
an old-fashioned East Hampton ice
cream/hamburger shop called Sip
‘n Soda and the Water Mill location
of the burrito joint, Sabrosa Mexican
Grill. But his love of restaurant
culture, chefs and cooking date
back to when he was growing up in
Los Angeles back in 1955, when his
parents would take the family to eat at
the Piccadilly Restaurant, where the
captain would allow the young Spitz
to prepare the Caesar salad tableside.
Fast forward to the early 1990s, when
the Great Neck native decided to explore
being a personal chef while still
holding on to his regular weekday job.
It quickly evolved into more than just
preparing meals for paying clients. 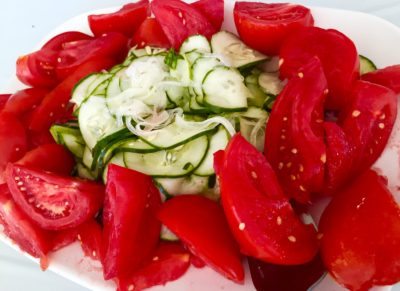 “It started as a personal chef interest
and I joined the USPCA (United States
Personal Chef Association) in 1993 under
my corporate name of BetsaPasta
PCS. I cooked at clients’ homes and
left them with proper freezing and
thawing instructions,” he explained.
“In one instance, a client asked me if
she invited friends over, would I cook
dinner for all of them and teach them
how to prepare each dish? It turned
out that I got busy doing small dinners
for this client, her friends and others
and the personal chef service then
became a thing of the past. It was more
fun to cook and give lessons.”
Spitz
has been
blogging since
September 2010,
with an estimated 95 percent of his
entries centering on a Long Island
destination. The personal writing
style jibes well with his photographic
eye and as an added bonus, he
includes some of his many favorite
recipes, including his flank steak
ragu recipe that helped him make it
through the first round of the Gordon
Ramsay show, Master Chef.
“I know a lot about photography
and photo composition. [For me],
nice simple photos make a blog or
book interesting, colorful and fun,” he
said. “Check out the succulent entry
from June. The pics are fabulous,
if I do say so myself. I’ve had folks
call me to thank me for letting them
know about this short-term, summer
Broadway market. Makes me feel like
I’ve reached people and am spreading
some cheer…not to mention good
taste…pun intended.”

While newspaper reviews help
plant the seed for where Spitz will be
taking his palate, word-of-mouth from
friends whose food tastes he respects
are far more important. It also fits with
Spitz’s desire to share the discoveries
he’s made during his travels in the
most glass half-full kind of way.
“Phoodographs is all about my
food photos...and Finds is all about
cool places to visit off the beaten
path and more effective ways to navigate
them for optimum enjoyment,”
he said. I write nothing negative
about any restaurant. It’s all about
my own experience and if it’s good,
I’ll tell people about the specific
dishes I/we enjoyed.”