If you want to take a day trip and you love tomatoes, wait no longer! Get in your car and head out to north fork of Long Island.
Taking nothing away from the wonderful tomatoes New Jersey produces, the north fork is where restaurants, including many Manhattan restaurants, buy their produce and now is the time to get out there while the pickin' is good. Especially good for my personal favorites, the cherry heirloom tomatoes. There are soooo many varieties, I can't keep up with them. I'll tell you this..whether they are green, yellow, red, a cross between green and red or striped, the sweet flavor cannot be beat. 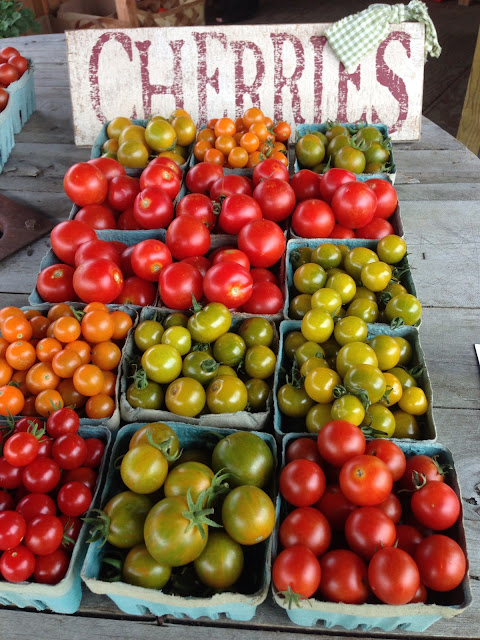 Cherry Tomatoes at Long Season Farms
There'll be plenty of time over the next 6 weeks to find great tomatoes, however the concentration of growers on the north fork is astounding...thus this IS the destination!
Over the last few years I have written about the tomato queens who's products I love...namely Cheryl's farm stand in Calverton (a stone's throw from The Peconic Herb Farm just north off exit 70 on the L.I.E.), Joanne Zelnicki's farm stand on Sound Avenue, and Flora, the Santorini tomato lady near Peconic (See past blog entries).
Now...it's time for two tomato kings I met for the first time a couple of weeks ago while perusing the north fork.
Let me now introduce to you Ken Jurow of Long Season Farms, an organic producer of fruits and vegetables in Aquebogue and Ira Haspel of KK's Farm, a biodynamic producer of fruits, vegetables, berries and herbs in Southold.
It was the middle of July when Sandy and I headed back to the north fork in our quest to expose the endless string of surprises that we don't even know exist until we find them ourselves...and that await visitors to the north fork of Long Island. Today, Sandy was looking for antique shops and I was looking for, in my opinion, the number one bounty of summer...tomatoes.
After a couple of stops at antique stores in Greenport & Southold, we stumbled upon Ira & KK's Farm. "KK" is Ira's wife and farm namesake, who we didn't get to meet.

There, in neat little rows was my first look of the season for...Voila! (vwah-lah; French vwa-lah) heirloom cherry tomatoes. It was also my first ever biodynamic purchase.Where have I been? 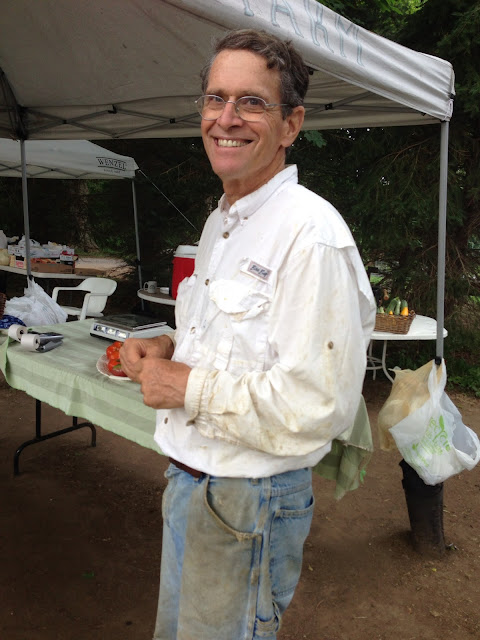 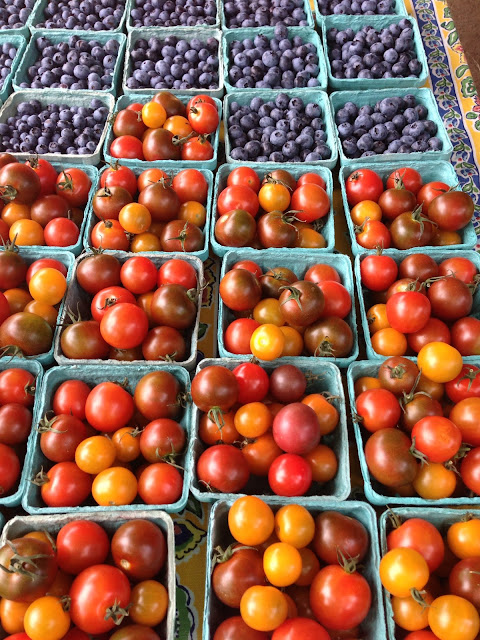 A fabulous assorted selection from KK's 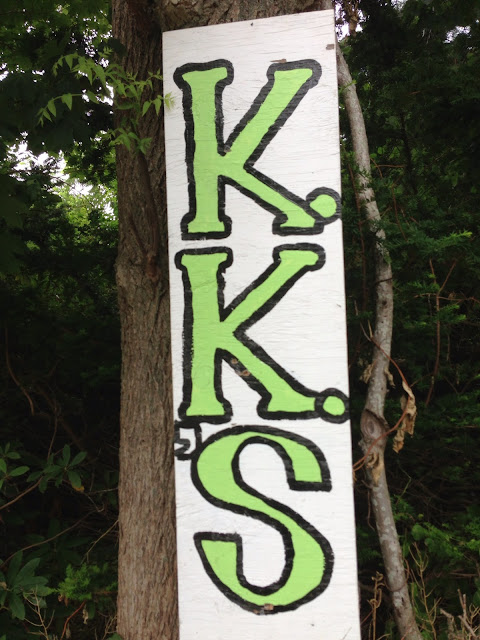 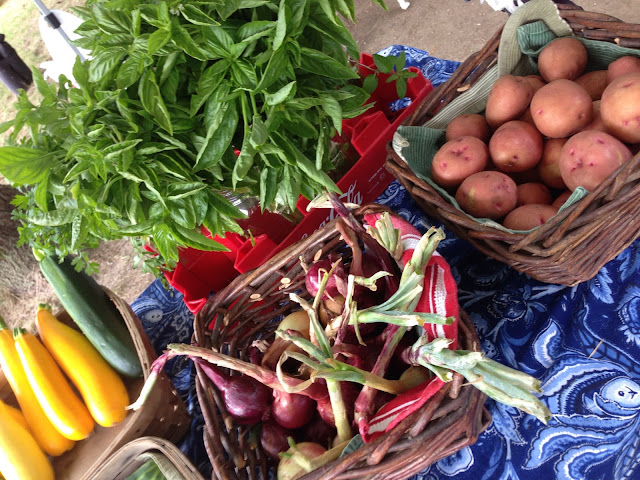 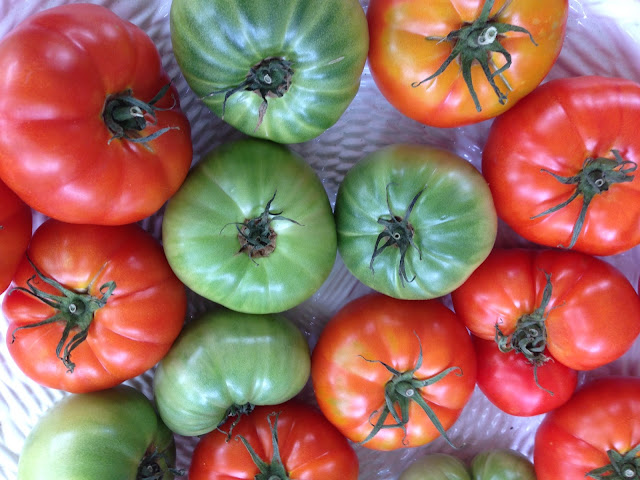 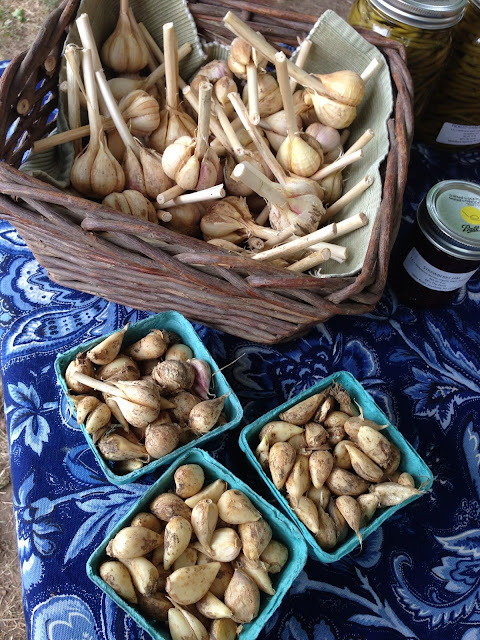 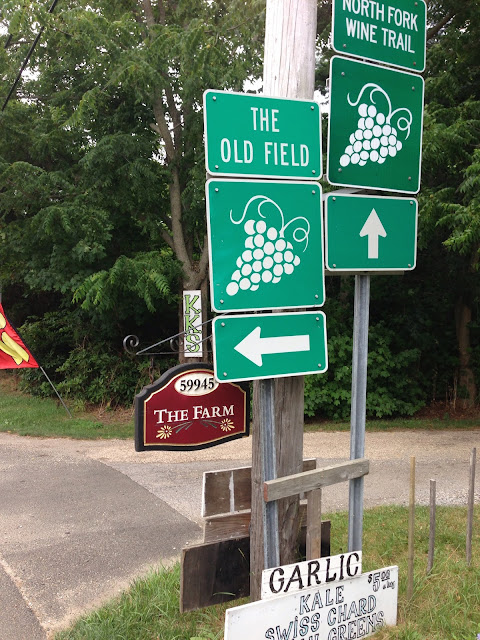 Look Close for KK's The Farm
KK's also offers products from Goodale Farms, a premiere producer of goat cheese and winner of the best goat cheese in the USA in 2011.

For those of you who are not familiar with biodynamics and would like to know more, see   http://www.kkthefarm.com/
.
While popping cherry tomatoes in my mouth for several miles along Route 25, I had to make an abrupt turnaround when Sandy exclaimed "oooooh, look, more tomatoes"! 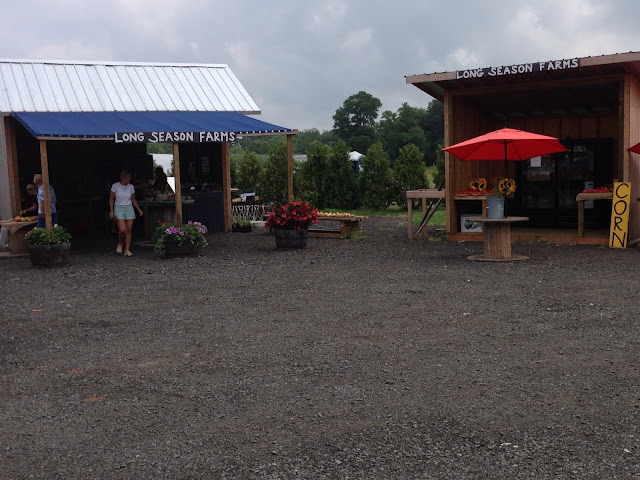 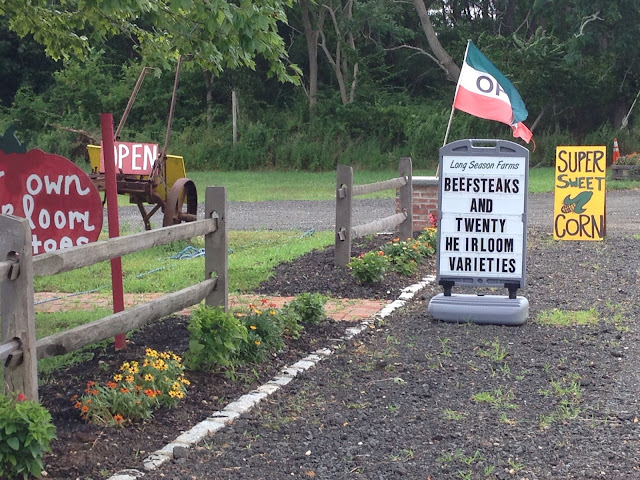 We were greeted by a smiling "Raven" as I poured over the vast amount of cherry tomatoes and other fruits and vegetables.We met Ken, who was gracious enough to show us all the different kinds of tomatoes...some of which I had never seen before. 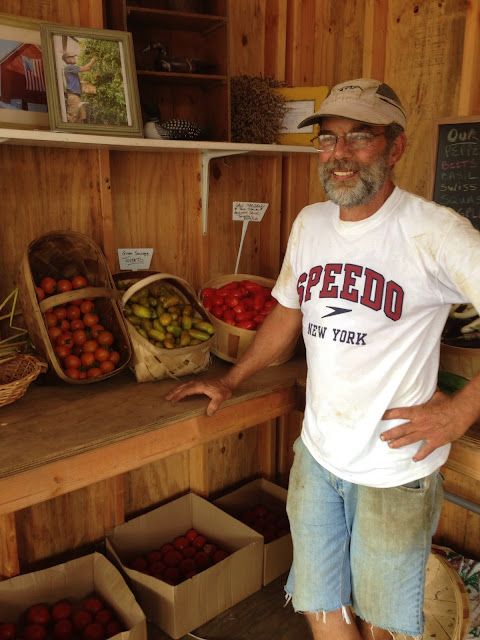 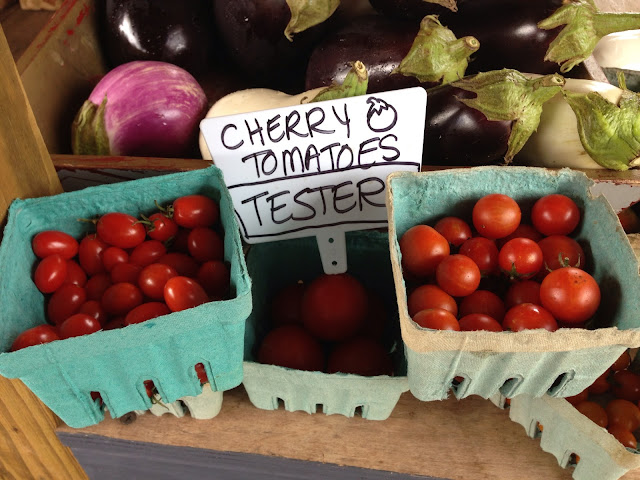 Want to taste the tomatoes...no problem. He made a sign letting visitors know the tomatoes are there for the tasting.

While perusing, another customer drives up and Ken proceeds to show and tell him about other products available.With all the back and forth between them, I was curious to know if this gentleman was buying for himself or a possibly for a restaurant. It turns out he was looking to create the next great dish at the well known Jedediah Hawkins Inn & Restaurant in Jamesport, and I had just met the new chef...ie Chef Rich. 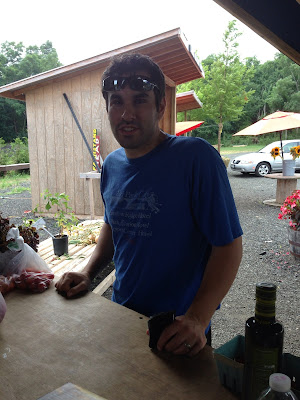 I was actually quite excited the timing created this opportunity to banter for a quick few minutes about Ken's 3 colors of eggplants and how Rich would apply a recipe to them. He felt a dish showing off the 3 colors of the eggplants could be enticing...perhaps along with some slow roasted tomatoes, commonly known in the world of chef's as tomato confit. 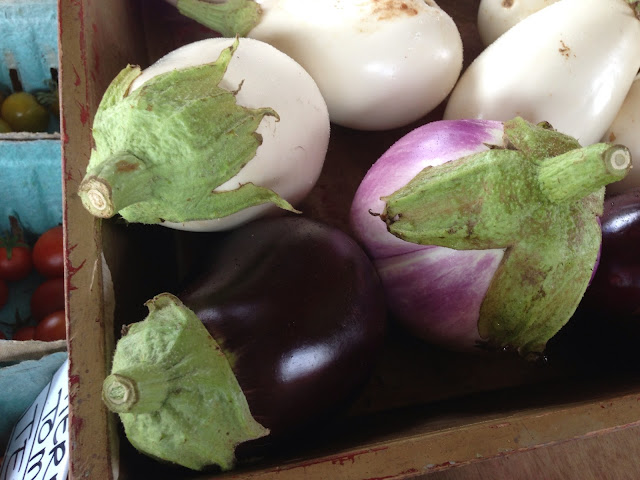 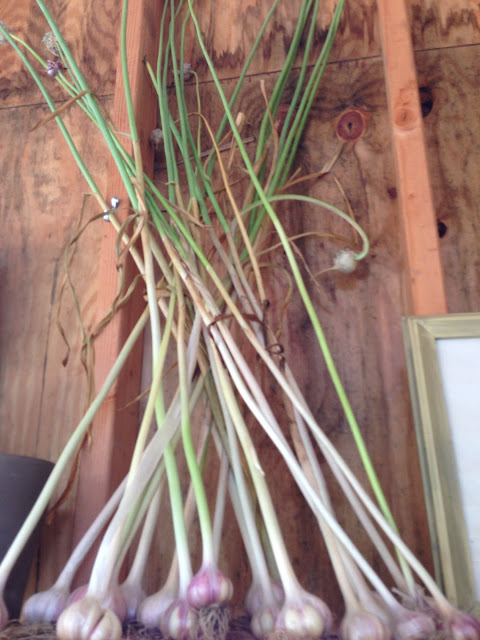 Now, getting back to Ken. In order for Ken Jurow's Long Season Farm to have a long season, some of his tomatoes are started early in greenhouses. As the weather gets warmer, he gradually exposes them to the natural elements and we are all the benefactors of a 'longer season'..ie early tomatoes. Just fabulous!
Tell Ken that Bert sent you and I'm sure he'll make the time to give you the same tomato tour I was given. 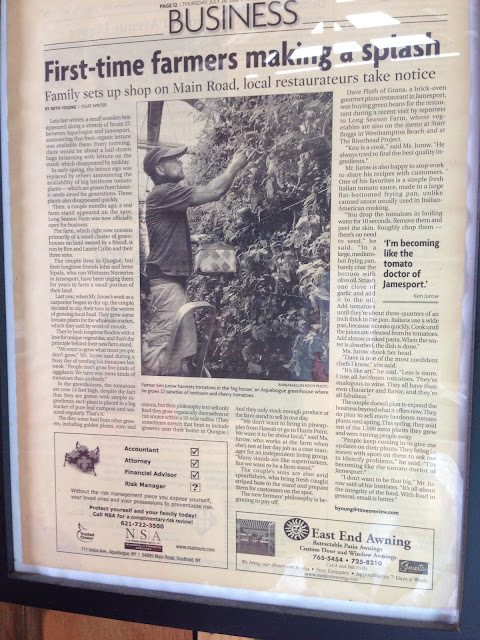 I met Ken's wife Laurie on my last visit and she was gracious enough to toss in, gratis, a bunch of purple basil... which is featured in the dish prepared below. 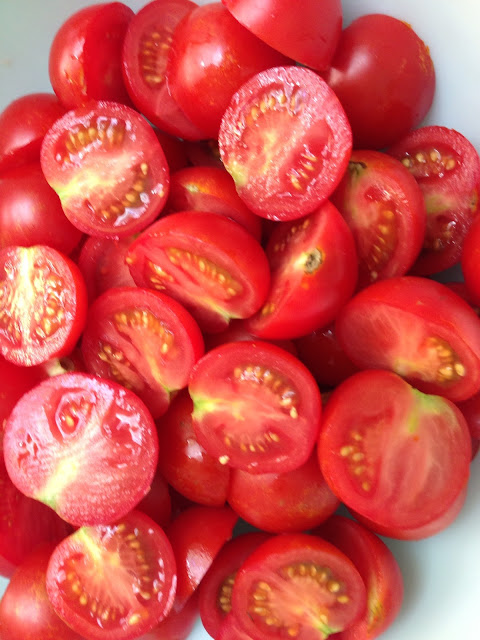 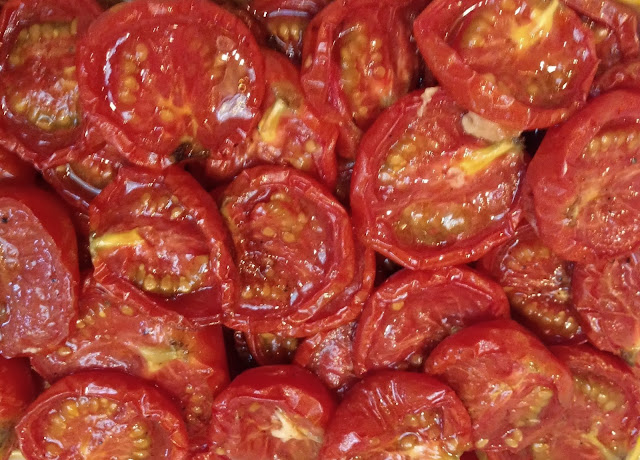 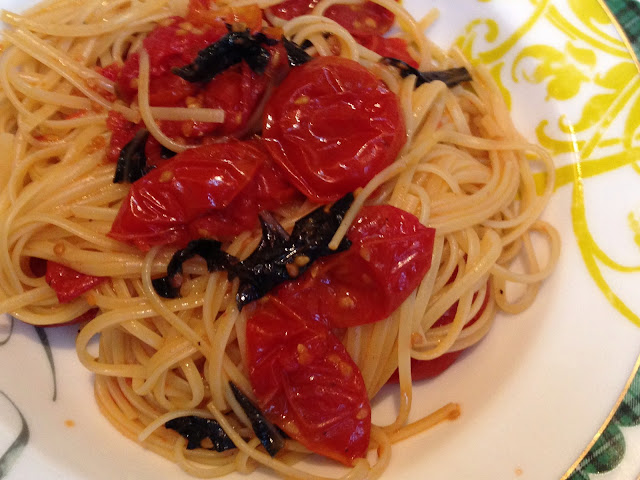 I made the pasta dish above  with both KK Farms cherry tomatoes & Long Seasons "Mountain Magic" tomatoes that Ken said were great for roasting. Applying the "slow roasted
" version of roasted tomatoes as suggested by Chef Rich for about 5+ hours @ 200 degrees and the summer tomato season begins!
. 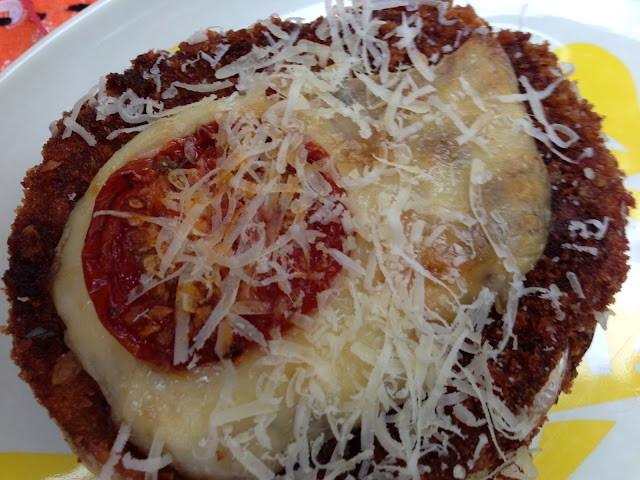 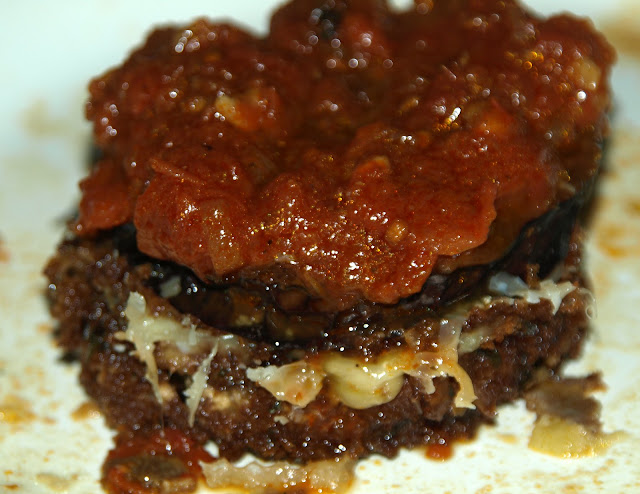 Gotta say that place looks like gods backyard, nothing better than fresh local fruits and veggies.

Have you ever done a homemade tomato sauce, those babies look perfect!

Going to miss those fresh local ingredients this winter.