Let me start by saying that although I was born and raised on Long Island, I have many memories of old Brooklyn.
My grandparents lived in Brooklyn at 385 Argyle Road, and although most of my food inspiration came from my grandparents on both sides, it was in Brooklyn where I experienced by first pizza. Around the corner from Grandma Hazel and Grandpa Sid on Cortelyou Road was Ebinger’s Bakery (famous for their “blackout” cake). A block further down the street was where I think I first tasted pizza in 1954…and it wasn’t in, as they called them back in the 1950’s, a pizza parlour. It was in a bakery.
As history tells it, GI’s returning from Italy after World War II created a nationwide demand for the pizza they loved.
There were perhaps a dozen or so pizza ‘restaurants’ in all of  New York and Brooklyn dating back as far as the early 1900’s with Lombardi’s NYC, however most pizza was found in a bakery. You wanted pizza, you either went to one of the several pizza restaurants, such as Lombardi’s or John’s in NYC or Totonno’s in Brooklyn…OR…you went to the bakery.
Some of the old time bakeries, and some newer ones knowing the obvious relationship between baking bread with cheese, are still making pizza.
That was my memory of pizza.
My grandparents Birdie and Henry on my father’s side were responsible for my introduction to the New York City “deli” scene. It all started at the Stage Delicatessen…which we will save for another entry.
I’m not sure why I hadn’t written about this sooner, however after visiting L & B Spumoni Gardens several times after meeting Tony Muia on his “A Slice of  Brooklyn Pizza Tour”…I figured it was about time I said something.
Therefore…Meet Tony Muia, owner and operator of  A Slice of  Brooklyn Pizza Tour since 2005.

Tony and his fuhgeddaboudit smile
All you have to do is get yourself into Manhattan in Union Square to get on board the “A Slice of  Brooklyn Pizza Tour” coach style bus complete with TV screens and the fun begins.
A Brooklynite himself, Tony takes you on a memorable tour of Brooklyn and two legendary Brooklyn restaurants in the world of pizza.
The first stop for us was Grimaldi’s under the Brooklyn Bridge (northern Italian style brick oven pizza) and then L&B Spumoni Gardens in Bensonhurst (authentic Sicilian style pizza).
In between, the tour takes you through unique neighborhoods in Brooklyn such as Sunset Park, Bay Ridge, Coney Island (& a tour of the boardwalk sites), Brighton Beach and Bensonhurst. Clips from movies such as Goodfellas, The French Connection, Saturday Night Fever  and more are part of the tour as the bus stops in front of the locations where segments of these iconic movies were filmed and where they are played for you right on the bus.
Tony’s tour has evolved…and although I’m not sure if it is exactly the same…I’m sure you will have a great time with Tony on this half day romp through Brooklyn.
I ran into Tony on the street this last Christmas 2012 on his “Christmas Lights & Cannoli Tour” (another of Tony’s tours…and another story) and was greeted with the same cordial sincere smile that reminded me of when we first met on the Brooklyn Pizza Tour.
If you want a unique experience that you will always talk about…this tour is for you.
After all, if Sandy and I didn’t take the tour with Tony, I would never have have been able to experience my (in the whole wide world) favorite L & B Spumoni Gardens calamari salad. Another raison d’être…or in Italian…ragion d’essere 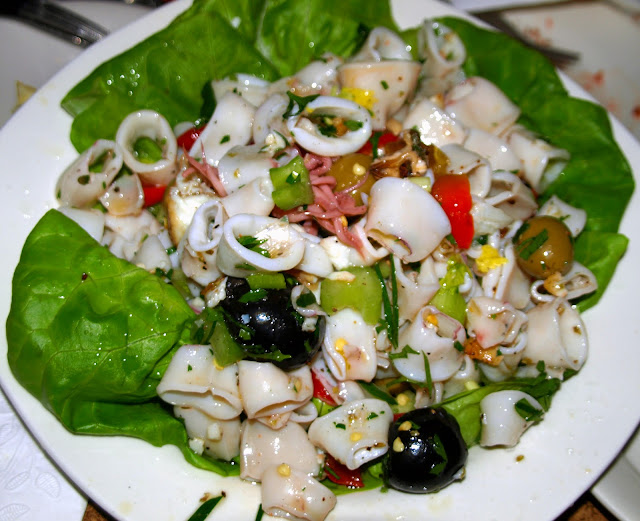 Truly brillante Calamari Salad
Goodness! What texture and flavor. Just check out the picture and that says it all. It tastes as good as it looks. Famous last words…”trust me”!
And for both of us, their eggplant parmesan and famous spumoni for dessert. Abbondanza! 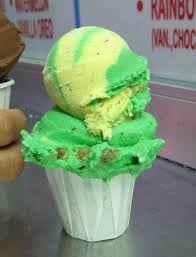 Oh…one more thing. Here’s a pic of my pizza at home. Brilliant! 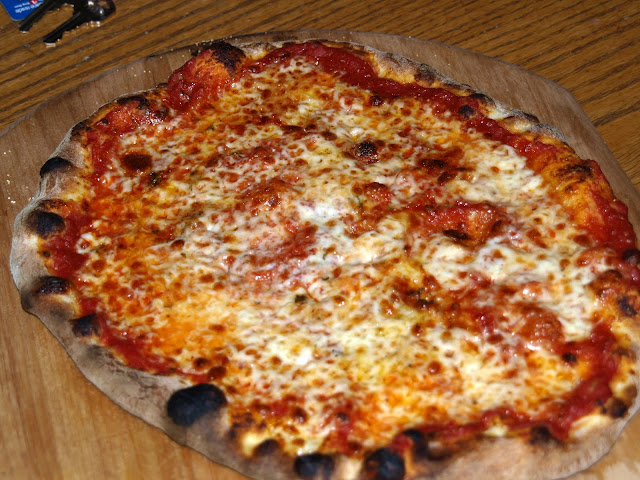