It’s Sunday morning and I’ve got to get over to the Oyster Bay Farmers Market for my fave bread & butter pickles at the Horman’s Best pickle booth.

Sandy decided to come along for the ride and I have to say if it weren’t for her decision to come with me, I probably would not have had my mind blown.

Btw…The phrase ‘blow one’s mind’ is rooted in the hallucinatory drug scene of the hippie 1960s. Originally the phrase could describe the effects of a drug like LSD and later covered any pleasurably shocking mental experience.

Ok…so back to reality 🙂

I go back to the car and drop off my pickles and see Sandy walking out of the Bahr Gallery across the street from the market. She says to me casually and points ” you’ve gotta go in and take a look around that art gallery” I look across the street and see a poster with the words Grateful Dead and a little sign that says “Hippies Use Side Door”. That certainly was a Welcome sign for me. Being a former ‘Hippie’, I made my way in!

I walk in the door and found myself totally astonished, astounded, awestruck and..er…mind-blown!

The last time I saw anything like what I was experiencing now (iconic San Francisco music posters from the late 1960’s to the early 1970’s) was in a poster shop in San Francisco in the 1980’s (the exact year I don’t remember)…and when I purchased a Moody Blues concert poster that I still have today.

Immediately I introduced myself to the gracious fellow who greeted me and asked him his name. “Teddy” he said. He just happened to be the owner, Mr. Ted Bahr, of this mind-blowing art gallery. I immediately visualized my next blog entry and when I told him I write a food blog, he offered me a “Feast For The Eyes Tour”. I liked the pun, thus the entry title. Thanks Teddy!

While walking around totally amazed at the posters I was seeing I was wondering  out loud why I never knew this was here and why I never saw an advertisement or story about this particular Bahr Gallery show in my own proverbial backyard? He then proceeded to show me an article out of Newsday and another one from the Oyster Bay Herald that we just happened to have had delivered to our house the day before and that we had yet to read.

For those of you who may be curious enough to wonder where inspiration for these posters came from, it seems to have been inspired by an art form known as Art Nouveau. Art Nouveau was an art style that was most popular between 1890 and 1910. It was a reaction against the academic art, eclecticism and historic-ism of 19th century architecture and decoration and it was often inspired by natural forms such as the sinuous curves of plants and flowers. I think of curves in plants and fibonacci  patterns immediately come to mind.

Flowers, curves, peacocks, updates of Art Nouveau images from the past (including skeletons and roses as seen above in the Grateful Dead poster with the skeletons and roses) made the perfect visual accompaniment for the acid-flavored Romanticism that took root during the Vietnam era. Even the fonts were poached from turn-of-the-century graphic art. Famous 60’s designers like Wes Wilson confessed their admiration for modernism, “the idea,” Wilson told Time in 1967, “of really putting it all out there.”

He was among the “big five” Haight-Ashbury poster artists (namely Rick Griffin, Alton Kelley, Victor Moscoso, Stanley Mouse, and Wes Wilson), who defined the iconography of the hippie counterculture scene that took hold around the Summer of Love and some are represented right here in Oyster Bay at THE BAHR GALLERY.

What was the Summer of Love you ask?

More than 100,000 people converged on the Haight-Ashbury neighborhood in San Francisco in 1967. Music festival attendees were called hippies, and many sported tie-dyed fashions. Psychedelic rock was the music of the Summer of Love…and in the words of the Chambers Brothers…there was Peace & Happiness too 🙂

Check out Wes Wilson’s mind-blowing (if I DO say say myself) from a 1960’s poster featuring the Association, Quicksilver Messenger Service, Grassroots and Sopwith Camel that just makes me smile. As well, check out some of the other artists coming right up! 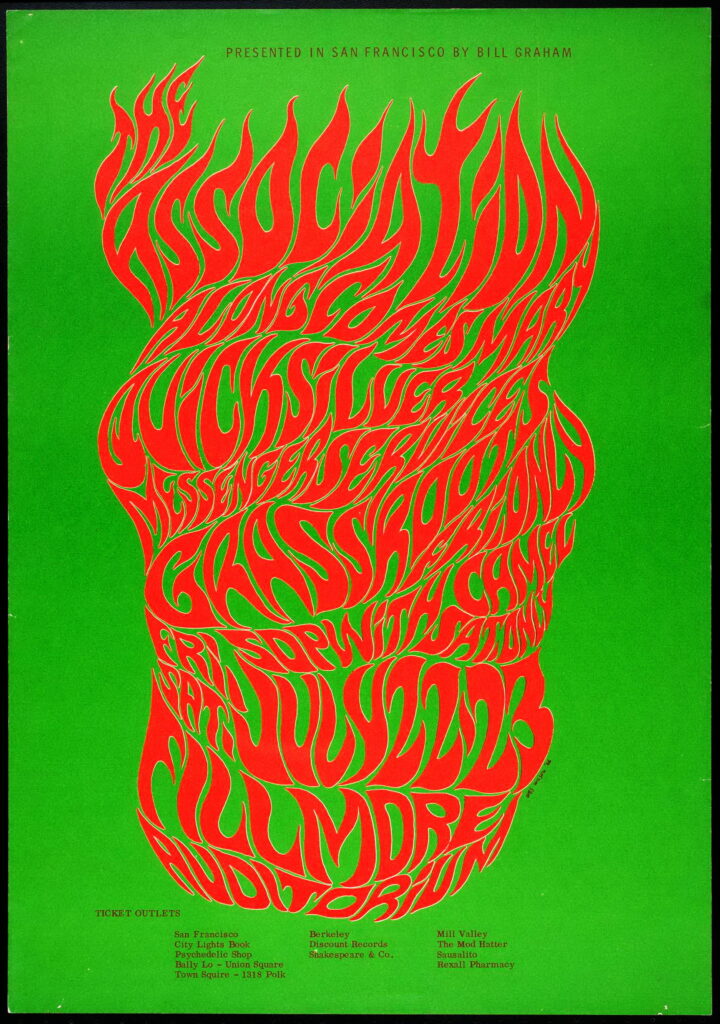 …and here we go! Look at all the acts in every one of these shows…

On display and available right here at The Bahr Gallery…

I just had to stick my Moodies Poster in here with the signatures of all the original members…ie…Justin Hayward, John Lodge, Ray Thomas, Graeme Edge & Mike Pinder’s signature (seen at the bottom).

There are really soooo many more artful posters in the gallery, but I think you get the picture.

Additionally, these phab posters are online at the Bahr Gallery website, www.bahrgallery.com, and they have a Facebook and Instagram @bahrgallery. But if you can get there in person, it’s absolutely, positively and unquestionably “worth the trip!”

To Teddy I say a most sincere thank you for the your wonderful tour and your fine reception! And…to all of my friends who share the same State O Mind as me…this is most definitely a show you do not want to miss. Trust me…Have I ever lead you astray?