One of my first major food experiences was when I was taught how to make a Caesar Salad by Captain Bosso at the at the Piccadilly Restaurant on the famed Restaurant Row on La Cienaga Boulevard in Los Angeles, California in 1956. I can still picture the giant wood bowls that were always used to make their Caesar salads. They must have been two feet in diameter.
Bosso taught me that tradition demands these salads be made in wood bowls and that they only used these wood bowls for their, at the time, 'famous' Caesar Salads prepared tableside on wheeled carts.
They would roll the cart over with all of the ingredients in separate dishes and this is how it went down:
A clove, or cloves, of fresh garlic would be mashed into the side of the wood bowl.
To that, Bosso would add French's yellow mustard (Dijon mustard, used in many Caesar Salad recipes today, didn't make it to the USA as a popular choice until the late 1970's), Lea & Perrins Worcestershire Sauce, fresh lemon, a coddled egg yolk,  olive oil, parmesan cheese, romaine lettuce, fresh made croutons and fresh black pepper from a mill.
Although some recipes call for anchovies, they were always optional at Piccadilly.
The fact remains that anchovy is one of the key ingredients in worcestershire sauce and to many that's just enough anchovy to savor the true taste of a Caesar Salad.
Nowadays, the raw egg (even though coddled) is also an option I offer.

I cannot honestly say I remember whether the olive oil used was extra virgin...nor can I make the claim that Parmigiano Reggiano was their choice for parmesan cheese.
What I do know is that after making this salad since 1956 when Booso would let me prepare it along with his guidance in the restaurant, extra virgin olive oil (EVOO) and Parmigiano Reggiano are the ingredients I choose to use and the flavor remains as consistent as ever. 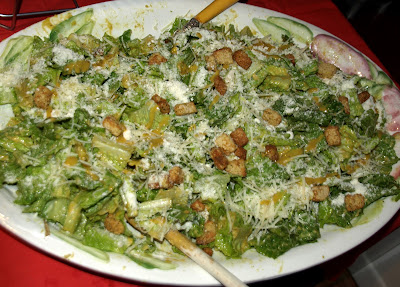 1 Tbsp. & 1 tsp. French's yellow mustard...yes, French's yellow mustard
1 Tbsp,  Lea & Perrins Worcestershire
Juice from 1/2  of a fresh squeezed lemon
1 small coddled egg yoke (optional for some health reasons unless you can find pasteurized eggs)
1 anchovy mashed (for me, seriously optional) I find white anchovies are not as strong a flavor, thus this is an alternative to the darker traditional anchovy. Remember, anchovy is in the Worcestershire sauce
1/2 cup EVOO of garlic infused EVOO (I infuse EVOO with fresh pressed garlic). There are too many tender stomachs nowadays to use the raw garlic, and I find that if the oil is **infused properly, the correct flavor will be imparted into the dressing. Thus, use  one medium size clove of pressed garlic for every 1/2 cup of EVOO
1.5 cups grated Reggiano Parmigiano
3/4 cup croutons ( I like Rothbury Farms Cheese Garlic)...however use what you like or bake your own
2 medium heads of Organic romaine lettuce cleaned and dried thoroughly ... coarse chop or rip and then toss with a few pinches of kosher salt and a few grinds of pepper...no dressing yet

In a separate serving platter or serving bowl...prepare the lettuce with the kosher salt and fresh mill pepper
Whisk  mustard , Worcestshire and lemon in a mixing bowl.
Slowly add the infused EVOO and whisk briskly until all oil is added and mixture thickens. Your option to add more of the actual garlic at this point. I do not unless it is requested by the client.
Add the croutons,  2/3 of the Parmigiano and 2/3 of the dressing to the lettuce and toss
Add the rest of the dressing and toss. If you feel there isn't enough dressing...as this can happen depending on the size of the heads of romaine...simply add a bit more EVOO and toss.
Use the rest of the Parmigiano to cover salad in the bowl...or divide into individual portions and top with Parmigiano.
Kosher Salt and Fresh Mill Pepper to taste

The Caesar Salad according to Rosa Cardini

Although the origin of the Caesar Salad is a topic hotly debated by epicures, the generally accepted version is that it was first popularized in the United States in the late 1920s by an Italian immigrant, born Cesare Cardini. He and his brother Alessandro moved to San Diego from Milan after the Great War and then decided to open a restaurant just across the border in Tijuana, Mexico, to attract Americans frustrated by Prohibition.
The family legend assiduously recounted by Rosa was that on Independence Day 1924, business was so brisk that the kitchen began to run short of ingredients. Cardini decided to cobble together a salad from leftovers, including romaine lettuce, olive oil, raw egg, garlic, parmesan cheese and Worcestershire sauce. The dressing was originally mixed at the table and used to coat the lettuce leaves, which were presented stem outwards so that it could be eaten with the fingers, in the time-honoured Italian fashion.
This new dish, named Caesar after its creator, soon became popular with visiting Hollywood stars and is said to have been introduced to Europe by Mrs Wallis Simpson. In 1953, a toque of Paris's leading chefs pronounced it to be America's greatest contribution to world cuisine, a judgement of which Rosa Cardini was very proud.
She had frequently, however, to defend her father's claim to have invented the recipe. Others advanced the case of a Chicago-based Italian chef, Giacomo Junia, while some hel
d that Cardini had appropriated the idea from a Sicilian waiter at his restaurant. Cardini's brother Alessandro also tried to take credit, but he made it with anchovies. Rosa Cardini frowned on all additions to the classical ingredients, particularly anchovies and croutons.
By the 1990s, one in four of all salads sold in American restaurants were made to her father's method, although its popularity in California was briefly threatened when a law was passed banning dishes made with raw eggs. The combined scorn of California's society women and Rosa Cardini was too much for the state legislature, however, and the act was swiftly repealed.
Rosa Maria Cardini was born in San Diego, California, in 1928. When she was 10, the family moved to Los Angeles, where her father ran another restaurant. As a child, she helped to bottle the dressing he made and sold it at local markets.
In 1948, Cardini obtained a patent for his recipe, although not for the name "Caesar Salad", which was held to be already too widely known. After he died in 1956, Rosa Cardini took charge of the business, jealously guarding her father's legacy and patenting another 17 vinaigrettes.
She gradually built up the Cardini brand until by the end of the 1980s it was a household name in America.
One thing I would like to add...
There was no mustard in the original recipe...however mustard found its way into many Caesar salad recipes of today.

The French's yellow...well, that's the way I learned it and that's the way I think it tastes best. Now and then, I'll add a little Dijon (my favorite is Bournier) in order to take into account the taste buds of today.

**Infused olive oil is made by taking fresh squeezed or thinly sliced garlic and letting it sit in the olive oil for about 30 minutes. Remove the garlic and you have infused oil. You can always add some of this garlic back into the recipe if you feel you want more garlic flavor.

PIC Coming...and remember...Don't be shy...please comment below. I love hearing from you!

Fresh Homemade Croutons up next!

One thought on "BetsaPasta Caesar Salad circa 1956"

Just made this and it was the best I’ve ever tasted. Thanks Bert for the greatest!!!