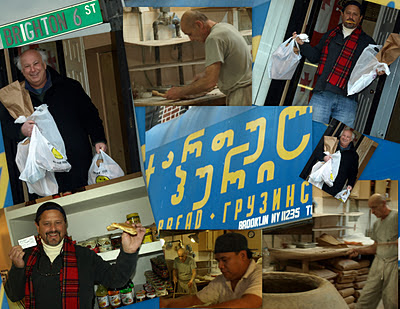 My fellow food buddy Jan took me to another obscurely located food find in, where else, Brooklyn.
A couple/few years ago he introduced me to the culinary delights of Brighton Beach Blvd. and most recently
to, for lack of a better understanding as to what the writing on the awning says, Georgian Bread.
We met “Badri”, a gentle man, gentleman, and THE baker. See him above using his paddles to place and remove the bread from the oven.
He bakes in a clay oven smack in the middle of the store called a tone’…or tandoor (seen below).
A bread called shoti is placed  literally on the inside side of the oven (I still don’t get the gravity end of this) and bakes in about 8 minutes. It ‘s shaped similar to a ciabatta and comes out crispy and smelling (no surprise) delicious.

Below is the bread named  Khachapuri (Georgian: ხაჭაპური – xač’ap’uri or “cheese bread”).
.

It is a filled bread dish from Georgia where bread is leavened, allowed to rise, and is shaped in various ways. The filling contains cheese (fresh or aged, most commonly suluguni), eggs and other ingredients.
Each Kcachapuri is $6 and, although relatively expensive (an entire pizza pie almost anywhere is $12)… you don’t get something like this anywhere else…and you certainly don’t get to smile like a loon from ear to ear or jump up and down tasting a slice of pizza as you do once you had your first bite of Kcachapuri.
It’s better than the “A” word which, beginning this year, we have decided to remove from our vocabulary…along with “my bad” and a few others.
Either way….. this “find” is worth the trip to Brooklyn.