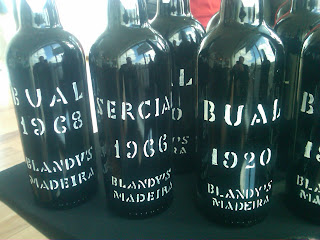 Madeira’s longevity earns it a special place in the realm of old wine. What other wine requires over a half century to mature? And what other wine, when a century old, still benefits from several hours of breathing and can stand up to several weeks in a decanter without losing its complexity or its richness? And…how many wines can live for two centuries and still offer not only the pleasure of their antiquity, but also the enjoyment of drinking?
First and foremost, we should thank Anthony Dias Blue, Editor in Chief of Tasting Panel Magazine (www.tastingpanelmag.com) and his staff for producing events like the Blandy’s Madeira Bicentenary Tasting.

The hostesses for this March 24th, 2011 NYC event were the gracious marketing and events director, Allison Levine and the assistant executive editor of “Tastings”, Nicolette Teo.
Moving right along…
Where is Madeira and, as well, where is it in relation to Portugal…the home of Port?
The Madeira Islands are 540 miles southwest of  Lisbon, Portugal in the north Atlantic Ocean. They are an autonomous region of Portugal, with Madeira Island and Porto Santo Island being the only inhabited islands.
They are a popular year-round resort and famed worldwide for their Madeira wine.

What is Madeira wine and how does it differ from Port wine?

Port originates in the Douro Valley, Portugal. The valley stretches east from the city of Oporto to the border with Spain. The term “port wine” can only refer to these wines, much like French regions lay claim to certain titles such as Champagne or Bordeaux.

Both Madeira and Port are ‘fortified’ wines; the wine has had grape brandy added to it after a couple of days’ fermentation, making it about 80% wine and 20% brandy. The main difference is in the regions the wines originate and the grapes used, making Madeira a bit more exclusive. Madeira is made with four varieties of grapes, and a bottle of madeira should be labelled according to which were used in it. These are:
-sercial, a very dry taste, light color
-verdelho, medium dry, golden color
-bual, medium sweet, velvety, dark gold to brown
-malmsey, the original grape, sweet, chestnut-brown
Back to the show…
I didn’t know a lot about Madeira wines, however I owed it to myself and my clients to learn what I could and to make it part of my service @ BetsaPasta.
To me, a Madeira was akin to a Tawny Port and a bit on the sweet side with that creme brulee smoothness and taste.
To a great degree, this is true…however primarily in the young wines and not true in the older vintages. 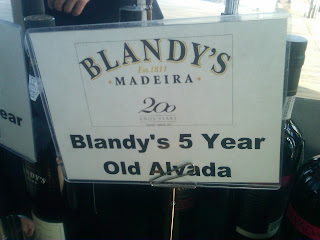 Upon entry, the tables were set in such a way that you were able to taste the younger 5 and 10 old wines first. Next were the older 15 year, 25 year and 35 year old vintages. Last were the 40-45 year old vintages, and rounding out the last table was the 90 year old 1920 Bual. Just to get to taste a wine this old is very special, however being a relative beginner in world of Madeira, I am probably a number of years away from truly enjoying and appreciating a wine of that magnitude.
I’m not going to discuss prices, however I will tell you retail Madeira costs range from quite affordable to very very expensive. 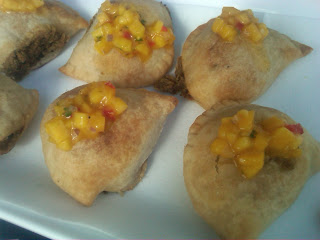 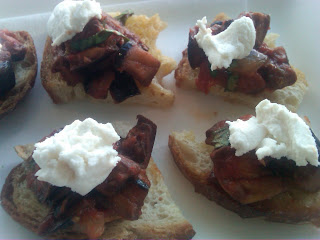 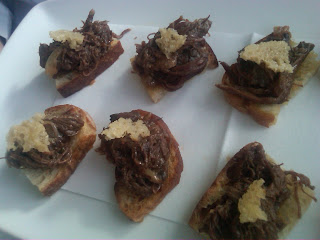 To complement the wines of the day, the hors d’oeuvres included empanadas with mango salsa, caponata with goat cheese, grilled chicken & cacciatorini (Italian salumi) pnini’s and a blockbuster short ribs (pulled pork style) with a parmigiano crust.
Getting back to the wines; I found the younger ones quite enjoyable…taking nothing away from the older vintages that were in a different class.
It’s clear the number one goal in any business is sales, and you can’t sell 45 and 90 year old wines exclusively and expect to survive. You must have a balance between all the ages available and in doing so please all the age levels of your customers.
To this point I would heartily suggest everybody go out today and start with a purchase Blandy’s 5 Year Old Alvada Madeira. It’s a perfect start into the world of Madeira wines. You can sip this wine as an aperitif or after dinner with dessert,  or you can mix it with tonic water and a slice of orange. Fabulous!
(75%-80% Tonic…20%-25% Old Alvada)
As one grows with Madeira, one’s taste buds will yearn for a more sophisticated taste and then onto the older wines. 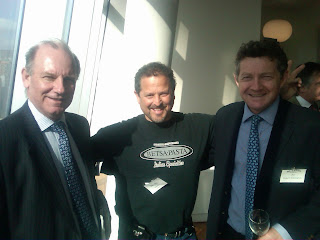 I was fortunate to have the opportunity to meet many interesting people and pose with the biggest names in the world of Madeira and Port, namely Michael Blandy and Rupert Symington, a Fourth generation Symington from the Symington Family Estates (www.symington.com), the leading producer of premium quality Ports.
They probably would  have felt the same about me if they knew they were hanging with a ‘brilliant’ chef.
The gentlemen were really quite gracious, and Rupert couldn’t help but sneak a queek peek at my BetsaPasta badge. He’s probably
still wondering where pasta fits into the equation.
If he were to have asked, I probably would have told him to simply saute an assortment of mushrooms, leeks and a bit of garlic in olive oil and sweet butter until golden…add some flat leaf “Italian” parsley, kosher salt and fresh ground white pepper…and then Madeira wine. Toss with fini linquine or thin spaghetti…and Mangia Baby!
Ahhh…he probably knew that anyway. 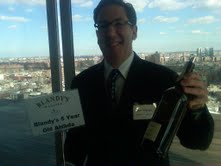 Thanks to Drew Kligman (above) for pointing the virtues of the 5 year old Alvada and the other young Madeira’s… and posing for my pic.

Pierre Dumas, the Canadian connection to Madeira wines was quite informative as was Ricardo Tavares, the Sales Director (it was his mixed drink recipe you will find above), and Arnold Trabb, the east coast account manager and gracious host of the 45 and 90 year old tasting table (Vintages 1966, 1968, and 1920).
I also have to thank Paul (last name missing) for taking the picture of the big guns and Bert.
To Dave Handschuh, a photographer at the Daily News newspaper in NYC and fellow foodie…I’m sorry I missed riding down with you in the elevator. Here, however, is the blog entry I said I would forward to you. I hope you enjoy reading it as much as we all enjoyed the afternoon!

Please note: A bit of technical information relating to geography and history was pulled directly from the Internet and I tried to be as accurate as I could with answers to my own questions.
Either way, please feel free to communicate with your “comments” and, as well, in order for me to correct any information that is not 100% accurate.
Enjoy…and thanks for staying posted to phoodographs and finds!
Bert

One thought on "Call of Madeira & Port"

To the readers of "Call of Madeira & Port…
please feel free to comment and I will respond.
Bert